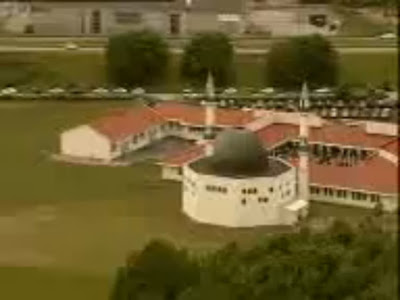 "Teaching 21 seven-year-olds in a primary school in the immigrant "ghetto", Cecilia Hallström is the sole native Swede in the well- equipped classroom.
"Of course, the school is open to everyone, but it is only Muslims who come here," she said. The children, taught in Swedish, are native Arabic, Pashtun, Kurdish and Bosnian speakers of a dozen nationalities. Hallström is a firm supporter of multiculturalism, but noted:
"People are just getting fed up. The far right is not new here, but it is gaining ground. We've taken in so many new immigrants that people are saying we need to slow down and take proper care of the ones that are here."
Signs of friction and trouble are not hard to find beneath the veneer of Scandinavian order, decency and prosperity. Beyzat Becirov points to the window in his office at Malmo's main mosque.
A bullet perforated the reinforced glass earlier this year, shaved the neck of a colleague and lodged itself in the drawer of a desk.
"We've got to defeat all fascism," said the imam and head of Malmo's 60,000- strong Islamic community.
"But you get it on both sides, on our side as well." His mosque is the oldest and biggest in Sweden. It has been burned down once, and a pig was placed in the prayer hall. Becirov said there had been 300 attacks since it was built in 1983. There have been riots. There are no-go areas.
Two things were new in Malmo, said Becirov. Recent years had brought a flood of people "from Asia, Africa, and Arab countries. There's a problem with the Somalis, the Lebanese, the Palestinians. They have difficulty integrating. And there's no jobs."
The other novelty was the local rise of the Sweden Democrats, who Becirov described as the "new Nazis", suggesting that the country was joining the European club. "It's a bit like a tsunami spreading across Europe. And now it's here, too."