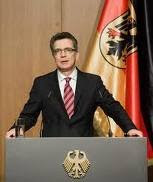 "In Germany, Interior Minister Thomas de Maizière has asked the federal states to push for the introduction of a nationwide Islamic curriculum in schools. So far negotiations with Muslim communities have remained deadlocked on legal grounds. At a conference in the city of Nuremberg, lawmakers and Islamic community leaders tried to look for a compromise.
In the Federal Office for Migration and Refugees in Nuremberg, more than one hundred experts tried to break the deadlock over the country wide introduction of Islamic education in schools. The minister of interior, Thomas the Maizière, urged the need to introduce it as soon as possible.
Almost all German states have introduced such pilot projects for Muslim students. But only one in twenty Muslim students is able to attend such classes.
In their families as well as in their communities, young Muslims in Germany are not always able to get the morale as well as the practical counselling that they need. The consequences are often conflicts, alienation from the religion and the identity crisis. This is why the government supports Islamic education in schools for the benefit of the children, despite the obstacles."
Källa, PressTV med TV-inslag tisdag 15 februari 2011:
http://www.presstv.ir/detail/165292.html